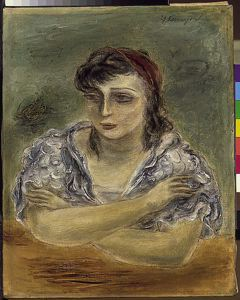 Kuniyoshi was born in Okayama, Japan, and came to the United States at the age of thirteen. During the late 1920s, he began spending extended periods in Woodstock, New York, and became an important member of the artistsâ colony there. Kuniyoshi returned to Japan twice during the 1930s, and his work was well received in his birth country. Despite his time away in Woodstock and abroad, he continued to be an important figure in the New York art scene. This painting portrays Sara Mazo, soon to be Kuniyoshiâs second wife, in a somber and reflective moment. They were married one year after the portrait was completed. The back of the painting bears inscriptions from the couple. Kuniyoshi wrote âTo Earl [sic] Grant with pleasant recollections of our meetingâmore of them. April 19, 1935.â Mazoâs reads, âWith much appreciation of your choiceâand to a new friend.â
Last Updated: 8/17/2021

Your current search criteria is: [Object]CurrentLocation is "@galleries@" and [Object]Display Artist is "Yasuo Kuniyoshi".