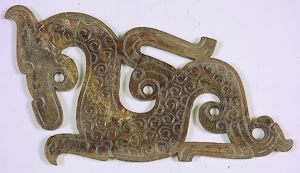 November 2004
Asian Tastes Installation
This wonderful sinuous creature is carved from a slab
of translucent brown-green jade called nephrite. Dragon pendants of this type appeared abruptly in the Eastern Zhou period of the 5th century BCE. They were made
in large numbers and shared variations of the basic form of an undulating body whose silhouette is embellished with stylized legs and projecting spirals. The profusion
and wide distribution of these dragon-shaped jade pendants show their remarkable popularity during the later Warring States period (475-221 BCE), and the care and skill used for each production indicates their value.
Last Updated: 3/27/2012

Your current search criteria is: [Object]CurrentLocation is "@galleries@" and [Object]Obj. Type is "Jade Pendant".