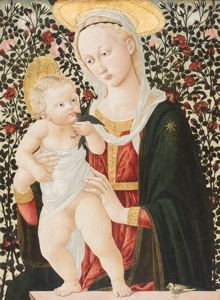 Madonna of the Roses

âPseudo Pier Francesco Fiorentinoâ is the name given to an artist or workshop responsible for a large output of devotional paintings in late 15th-century Florence. The name derives from the fact that many of these works were once attributed by scholars to the painter Pier Francesco Fiorentino, but the paintings are composed of motifs taken especially from the works of Pesellino, Filippo Lippi, and Benozzo Gozzoli, the leading artists of his generation. This lyrical example, with its clear colors, beautiful goldwork in the haloes, and elegantly composed draperies, demonstrates the principal elements typically found in the Pseudo-Pier Francescoâs work. The rose hedge backdrop is symbolic of the purity of the Virgin Mary and of Christâs passion; goldfinches, whose diet includes thistles and thorns, are likewise traditional symbols of the crown of thorns and Christâs passion.
Last Updated: 2/1/2016

Your current search criteria is: [Object]CurrentLocation is "@galleries@" and [Object]Obj. Type is "Tempera Painting".