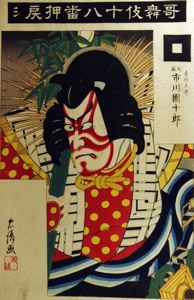 Ichikawa Danjuro IX as Aotake Goro in "Push and Repel"

In terms of subject matter, that of Kabuki actors had the greatest longevity in the history of Ukiyo-e printmaking. They are one of the earliest subjects to have been published during the beginning of the genre in the seventeenth century, and they were among the last to continue in popularity into the end of the 1890s. This work from the waning years of Ukiyo-e depicts the hero of a type of short performance that showcases multiple methods of engaging and repelling demons. He has all the standard iconographic elements for this stock character: the stalk of bamboo, exaggerated red face paint, straw hat, and vest with gold rivets.
Last Updated: 2/17/2011

Your current search criteria is: [Object]CurrentLocation is "@galleries@" and [Object]Obj. Type is "Woodblock" and [Object]Century is "19th century".